Consumerism and
The Theme Park
(1)

“Even if one puts aside the theme parks' unfiled injury reports, or the egregious gender stereotypes, ultimately, Disney is creating an army of consumers out of children, which is a frightening thought.” (2) 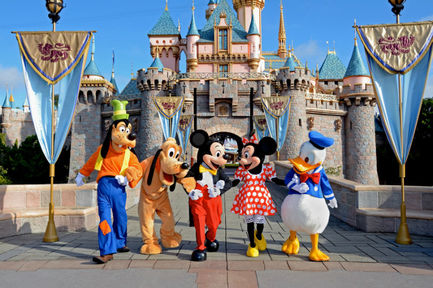 Common Disneyland Characters (3)
Theme parks at their base are created to make money. These parks are corporations; corporations that collect about twelve billion dollars in revenue, but only contribute fifty-seven million dollars to the U.S economy (4). So where is all the money coming from? The answer is the millions of people who visit every year.
To some people, a trip Disney is a magical, fun-filled experience. To others, "Disney is merely a commercial machine built to sell tickets, overpriced toys and a stereotype of girls as princesses" (5). Disney represents the American economy because it is a capitalistic corporation based almost entirely off of consumerism, the propellor of the United States' economic system (6). Because of the increasing popularity of theme parks, they have become a rite of passage to millions of kids who grow up watching Disney characters. Disney movies are widely popular and not only do they provide entertainment, but they also provide role models. Many young girls admire the Disney princesses, such as Jasmine, Cinderella, and Pocahontas. Children who grow up on the Disney movies aspire to travel to Disney World and meet their favorite characters in real life. As a result, some parents feel obligated to take their children to amusement parks such as Disney in order to please them. Amusement and theme parks use this to their advantage by appealing to the younger generations.
Once these parks gained the knowledge of what appealed to their audiences, they were able to achieve their goal of mass consumption in order to make a substantial profit. The popularity of amusement parks rose exponentially( with Disney World getting about 18,500,00 a year today)(7) . The goals of theme parks never changed, but have expanded over the years to meet the demand. Disney, Six Flags, and Seaworld are among the many amusement parks that millions of people attend throughout the year. Therefore, amusement and theme parks represent the development of many consumeristic industries in the United States.